An author who can raise the temperature of any room: Maddie Taylor 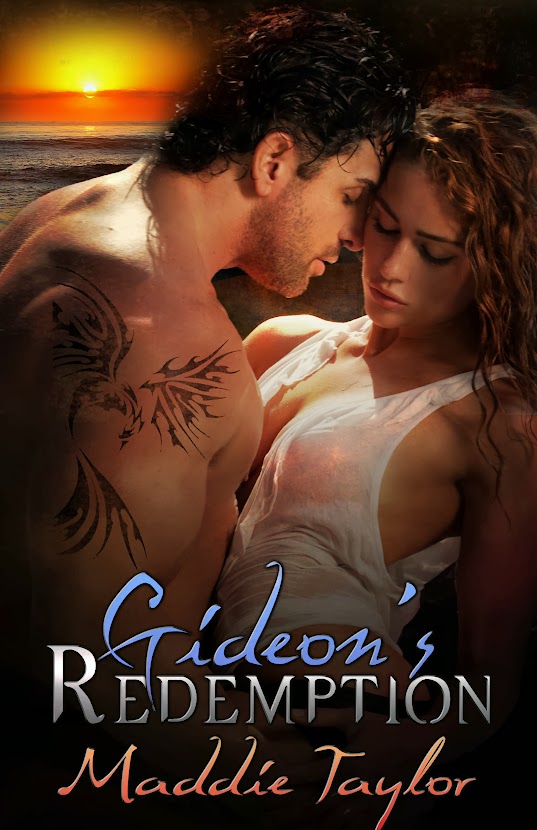 Maddie Taylor's stuff is hot by just about any measure: her books--especially her new rockstar spanker Gideon's Redemption--are selling like, you know, hotcakes--but more importantly those books would be in serious danger of spontaneously self-combusting if they were on paper because of the heat of the spanking-and-sex scenes inside. Maddie's been incredibly kind to me as I've found my way in this wonderful community, and she's had me on her Wicked Wanton Wednesday series twice now--I'm thrilled to be returning the favor at least halfway and getting her answers to Emily's Questions. (I'm especially thrilled because those answers are so wonderful! Especially the desert-island one! Yum.)


I have been a voracious reader all my life. When the e-readers came along I thought it was the best thing since sliced bread. As I saw new authors popping up daily, self-publishing as easy as pie, I thought… I can do this. Inspired, I sat down and began writing my fantasy world of Club Decadence. First published in 3/2013, here I sit 10 months later promoting my 10th title.


Can I be stranded with Tony “Cap” Rossi from Captain My Captain??  Please!!!! Then we could role play Gilligan’s Island until my heart’s content. He’d be the professor and I’d be Maryann. My fantasy of course would be a bit bent and include bondage. The professor would morph into a muscular, sexy, alpha male closely resembling Jimmy Thomas (see Gideon for reference, yum!). Being the professor, he would be able to train me to make my own bondage ropes from the abundant natural resources. Once I had fashioned my own bonds, he would have me, spread eagled on a bed (hey, it’s my fantasy, we have furniture), tied over a bench or even bound to a palmetto. If he wants to add a blindfold or a well-placed swat, smack or thwap, who am I to say no? He’d ignore me anyway: "no" is not an acceptable safeword. Sigh… Did I mention my husband’s name is Jimmy? Seriously!


I think it is both. We all have different likes/dislikes, little quirks, twists or oddities. You may like chocolate cake for dessert and I might choose apple pie. We are all wired differently and as long as we are consenting adults and no one gets hurt (yes, this is subjective) I say, to each his own. It is not up to me to judge.


I think I mentioned earlier that my fantasy stars Cap from Captain My Captain. He was my first hero and will always hold a special place in my heart. Plus, he is the template that all of my dominant males are patterned after, so there is a little bit of Cap in all of my heroes.


I have to admit that after reading textbooks for half my life, I am a romance junky and read very little from other genres; I rarely read non-fiction unless it’s a good biography. I am a big Gone with the Wind fan so I would have to say my favorite male character is Rhett Butler. Despite his reputation as a rogue and opportunist, he actually possesses some very attractive character traits, the best of which is his devotion to Scarlett and his daughter Bonnie. He sees himself in Scarlett and as he waits for her to one day grow up; he is always there for her when she needs him. Of course, the tall, dark, handsome charmer has other things going for him as well. I just wish he had taken the opportunities presented to him and spanked her. It would have saved them both a lot of heartache.

And now the best part--a sizzling excerpt from Gideon's Redemption:


She paused and he could almost see the wheels turning as she considered his words. “You’re right. I still have a guilty conscience. Whatever you think I need is what I deserve.”

“I will always give you what you need.”

The next swat took her breath away, and the next. As well as the two dozen more that followed. Gideon didn’t enjoy punishment spankings at all, but he knew his girl’s guilt ran deep. If she had been the only one affected by her actions, she would have easily set it aside when forgiven. However, the impact had extended to Eli and himself, which increased her burden of shame and remorse.

At some point, she began to cry. Poor girl, she’d learn to be more careful with what she asked for from him. Although he didn’t give her his worst, he made sure it was an effective punishment. Pausing halfway, her sobs and moans were accompanied by pleas for him to stop. By the end, she lay submissively across his lap, yielding to the inevitable knowledge that the spanks didn’t stop until he said so.

She moved off his lap and instead, straddled his thighs. Her bare breasts grazed his chest as she wrapped her arms around his neck and cried out her pent up emotions. He held her close for a long time, until her sobs stopped and her breathing returned to normal.

“I’m glad. But you are either going to have to move off my lap or take me inside you, babe. Your heat is too close to my cock for me to hold off another minute.”


Shannon Hughes’ worst nightmare comes true when her rock star boyfriend, Gideon Eli, appears to be cheating on her. Upon learning that she is pregnant with Gideon’s baby, she hopes to salvage a friendship, but those hopes are quickly dashed after she receives from Gideon’s manager a check for $25,000 and a note telling her to move on and leave Gideon alone. Seeing no other choice, she starts out on her own as a heartbroken single mother.

It is not until nine years later, when a chance encounter brings her together with Gideon once more, that Shannon learns the truth. She discovers that their split was based on a terrible misunderstanding, but worst of all, the situation was made possible by her lack of trust in Gideon. Resolved to make them a family after all, he promises that nothing will tear them apart again because things will be different this time. This time, he will be in charge.

Her world is turned upside down when she begins her new life in Gideon’s plush Malibu beach house, and Shannon soon realizes that Gideon’s dominance is very real. That dominance includes the frequent baring of her bottom for a sound spanking, but even after he has spanked her hard and long and assured her that he forgives her, Shannon’s remorse for the nine years she spent away from him is almost too much for her to handle. Can Shannon forgive herself, move on, and begin to live a full and joyous life again, or will the scars of the past never heal?

Buy it on Amazon!
Buy it on Barnes and Noble!
Buy it on All Romance EBooks!
Buy it on Kobo!
Buy it on Blushing Books!
And check out Maddie's wonderful blog!
Posted by Emily Tilton at 9:00 AM