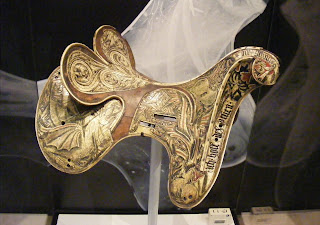 It's time at last for the next book of EXPLORATIONS proper. In the 29th book, Emily's Shameful Ride, the defloration of deflorations takes place for Victorian Emily, upon a device traditional in the "great drama" Emily has discovered: the bride-saddle. At the same time, in the modern story, fantasy-Emily is rendering shameful service to three of her husband's junior colleagues--I promise an excerpt from that plot for Friday!

I'll give you the tiniest of teases from the Victorian scene to whet your appetite:


He sniffed the air, and smiled. Then he insinuated the tip of his middle finger within the bottom he held, so far that I gave a startled cry, and leaped away from him a little.

“Now, my dear,” he said, letting go of my hand, “you must make up your mind to it, or it will go very hard with you. I am renowned among my friends for my enjoyment of a trollop’s confusion at having her reluctance overcome and her bottom ravished, when she hesitates to give the full measure of the service I have paid for.”

And the blurb shall be revealed, of course!

In the 29th book of Explorations, Victorian Emily's ultimate defloration occurs atop her husband's bride-saddle, while in fantasy-Emily continues her shameful service to her husband's junior colleagues.