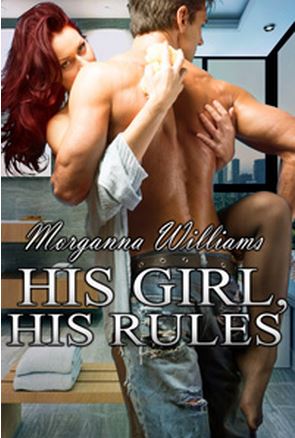 I'm absolutely delighted to have Morganna Williams, who exploded onto the spanking-fic scene with The Commander's Mate in September, over to answer my questions and share her new book, His Girl His Rules!

I write because I have to. All of these stories are rolling around in my head and they need to come out. I started out just writing shorts and gradually moved on to novellas and novels. In a way I was writing before I started putting the words to paper. I used to entertain myself as a kid by running dialogue and scenarios with made up characters in my head. Of course they were often silly but even then it wasn’t unusual for a spanking to occur.

Hmmmm...that’s a very interesting question. I have one that I always come back to; A man tied to a bed and his lover who is usually submissive teasing him to the brink again and again while he orders her to untie him and threatens to make her pay for her actions. Finally, she straddles him and rides him a bit but finds she needs him taking her hard and fast so she unties him, expecting he’ll immediately finish what she started. Of course he immediately turns her over his knee and spanks her with his hand until her bottom is scarlet. Then urges her onto her hands and knee, she goes eagerly but then is dismayed to look over her shoulder and find a hairbrush in his hand which he uses very generously before taking her hard from behind. He of course wrings multiple orgams from her until she’s promising to be good and begging to rest. I actually wrote a short story along these lines. :-)

I feel like I was born a spanko. When I was five and out to dinner with my parents and my father’s boss and his wife. I asked the wife if her husband spanked her. My mother of course nearly died and told me “We don’t ask people such personal questions young lady!” Thankfully my father didn’t hear. The funniest part though is that the lady actually answered me and I’ve never forgotten it. She said, “He tries dear, it doesn’t really hurt but I pretend it does.” Since adults spanking adults was never discussed in my home and I was spanked only a couple of times that I remember I feel its safe to say I was born spanko. BDSM is just a natural progression from there. Anyway, those are my thoughts.

I think my favorite is Shannon. I have another book coming out soon featuring her and her relationship with Landon. It’s kind of set up like a spanking situational comedy with each chapter being an episode. You will see Shannon is a bit of a mess but she is also a lot like me. I have the tendency to not always think before I act and don’t pay near enough attention to life’s little details like speed limits, tires, due dates...etc. Its not intentional but I tend to get caught up in the moment sometimes. I’m better than I used to be but I still have what I like to call “Situations” I’ve always thought situation prone sounded much nicer than accident prone or disaster waiting to happen.

I think Holly Golightly from Breakfast At Tiffany’s. Something about her deep sadness covered by the bright exterior calls to me. I want her to be happy. Of course she ended up with George so how could she not be?

Thank you so much for having me as a guest on your blog today Emily. Here is an excerpt from my new book His Girl, His Rules. I hope you like it! In this scene Glory just threw a little hissy fit at dinner with Gabriel and decided to leave without him; lets see how it works out for her:

Grabbing her purse, Glory walked swiftly away from Gabriel and out the front door of the restaurant. She smiled thinly at the valet and asked him to call her a cab.

“That won’t be necessary,” Gabriel told him from behind her as she felt his hand close on her arm.

Glaring up at him in outrage, she tried in vain to tug her arm from his hold. “Let me go this instant!”

He tugged her up against him and leaned down to whisper in her ear, “I suggest you lose the attitude fast, young lady, or you’ll feel the flat of my hand right here and now. Are you going to behave yourself or give this young man a free show?”

Glory felt her face heat up as she glanced nervously at the valet, who was watching them curiously. “I’m sorry; I won’t need that cab after all.”

“Good decision, sweetness,” Gabriel said as he planted a hand in the small of her back and urged her into the parking lot. As he helped her into the car, Gabriel pulled her skirt up in back until her bare bottom was exposed.

“What are you doing?” she asked in alarm.

“I want your bare bottom sitting directly on the seat,” he told her as he rolled the back of her skirt up until he could tuck the whole thing into her waistband.

Glory was scandalized; the front of her was completely covered, but anyone looking into the car would be able to see a large portion of bare hip on both sides where the skirt tucked behind her waist. “I can’t ride all the way home like this!”

She moved around, achingly aware of the coolness of the leather seat beneath her and shocked by the escalating level of her own arousal. What was wrong with her?

Gabriel leaned in to loom over her seat, seeming to surround her with his body heat as he captured her eyes with his stern gaze. “You can and will ride home exactly like this with your bare bottom right there on that seat. I want to be able to look over and see that you’re doing exactly as I instructed. Hopefully, by the time we get back to your house you’ll be in the right frame of mind to apologize for your childish behavior.”

Glory felt embarrassed tears begin to well up and she sniffed them back stubbornly. How had they gone from such a nice evening to this so fast?

Gabriel has just been going through the motions in life since his wife’s death four years ago, but almost from the moment he sets eyes on her, he wants Glory as his own. Despite never having been taken in hand before, she responds beautifully to a good, hard, bare-bottom spanking, and his dominant lovemaking leaves her breathless. But when Glory foolishly puts herself in extreme danger, she soon discovers that naughty girls who take risks with their safety get their bottoms thoroughly punished… inside and out.

Click here to buy the book on Amazon!
Posted by Emily Tilton at 9:00 AM