A deal with the devil, for a voluptuous schoolmistress: what Emily is up to 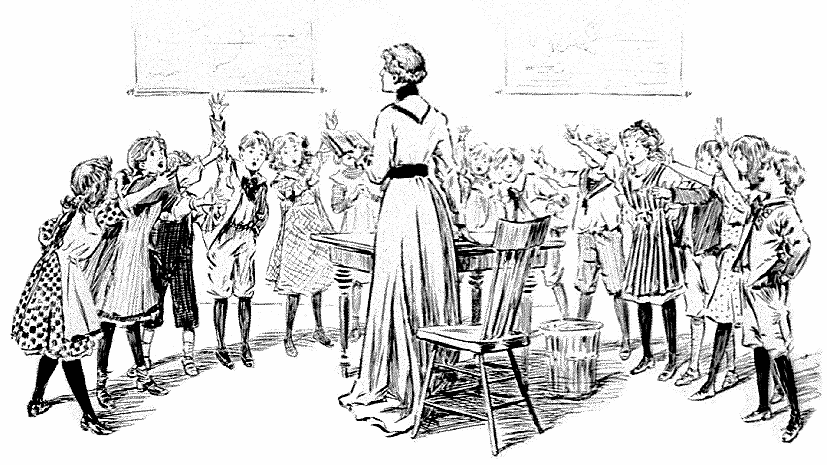 This one got way out of control very quickly, and became much grander than I'd intended. Unlike Trained at the Castle, though, the process of wild elaboration for Miss Halton's Preparatory Academy for Girls has flowed almost seamlessly, perhaps because my mind seems to live in the Victorian period most of the time anyway.

This excerpt will seem fairly mysterious, perhaps, but I imagine you'll be able to discern the outline of what I'm hoping will prove a fascinating, and very hot, story.

The vexation rose in Clarissa's mind, as it always did, at the recollection of the bargain with the devil she had made when the duke chartered the school. To recall, at the same time, the striking irony that Mrs. Fayerweather, too, must think she had bargained with the forces of Hell in the very same transaction did not ease the smart.

The conflict Anne must surely feel now, having had her visit from the duke, would only grow this evening and night, at the castle, even as her understanding increased. Clarissa told herself that she must allow the girl to make her own decision. Clarissa's own heart lay with the minority of the girls who, like Sarah and Esther, resisted the siren song of false modesty that Ursula Gregory and Joan Porter sang, in perfect concert with their doyenne, the only truly wicked woman at Miss Halton's Academy, as far as Clarissa was concerned: All you must do, to win your way back into society, is pretend that you do not crave the shameful things in which you must take part tonight. Nevertheless, even Clarissa could not deny that for girls like Ursula, the idea that they would become the apparently respectable wife of a man who demanded only that they never give a sign of being his filthy little whore, and wink at his fucking whomever else he pleased, made much the fairest prospect of happiness.

Without that sort of gentleman caller, Miss Halton's Academy would not have constituted a viable proposition: Clarissa knew it well. Men like Esther's Mr. Adams, and perhaps also — Clarissa fervently hoped — Sarah's Mr. Westenra, who interested themselves in a different sort of life to the one envisioned by most, did not exist in enough profusion to render her school useful to society on their own. Nor were there enough Lord Lerners, whose grandeur made the prospect of serving as his special chambermaid attractive to some of the girls in the respectable set.

No, one needed many of the more ordinary sort of gentleman, who, flattered by the duke's friendship and overwhelmed by the voluptuous glamour of a party at the castle, came to call upon the Ursulas and Joans, and then took them away to be married. These men fretted themselves not at all that the duke, as well as his other friends, had fucked their blushing brides. Rather, these ordinary gentlemen were happy to receive a wife from the Miss Halton's school: a young woman who could pretend to recovered modesty while serving her husband's lusts in her boudoir — not that the future homes of such girls as Ursula and Joan would have a room so denominated!

Clarissa served herself from the sideboard, and then sat in state at the head of the table, wishing she could hear Sarah and Anne conversing. On either side of her, though, sat Ursula and Joan, as the dormitory captains always did. If only Clarissa could at least choose the captains! But that privilege also Mrs. Fayerweather reserved for herself: by it she made certain that the charade of respectability remained in place, for the right of the captains to punish the girls in their dormitories delivered the message very effectively that despite the voluptuousness that constituted a very great part of the school's practices, the girls were to understand those lewd practices — the naked inspection, the display of their cunnies to the warders, the lascivious uniforms — as intended to teach them to value their modesty more highly than they had, hitherto.

When she had finished her cold mutton, Clarissa rose from the table, and the girls rose with her. "Time to dress, girls," she said. She took the list of gowns from her reticule, and offered it to Joan. "Miss Porter will assign gowns, and I will approve her selections."

"What color will you wear tonight, miss?" asked Sarah from the end of the table. Joan looked disapprovingly at the speaker, but Clarissa smiled.

"Red, tonight, Miss Crawley. I have a new gown from Paris."

Even Joan could not resist the charm of that revelation. "Truly?" she said, turning to Clarissa, and the schoolmistress saw for a moment the same innocent girl who had ridden here to Panton in the carriage with her from London, almost a year before, after a near seduction by a wool-merchant had reached embarrassingly public proportions.

I'm guessing Miss Halton's will appear at the end of April.
Posted by Emily Tilton at 10:36 AM