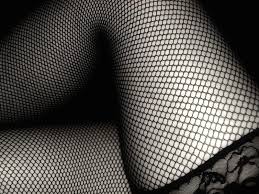 (See here for an explanation of this series.)

Carl looked at Greta, where she lay over the lap of the anonymous trainer. The look in her eyes told him everything he needed to know: it was a challenge to him, to try to master her the way this demigod was demonstrating she should be mastered.

At his wits' end with her refusal even to admit that everything was not as it should be in their bedroom, he had answered the cryptic ad: "Wives trained; demonstrations given." According to the arrangement made by email, when he had pulled up at the address, three burly men had been there to pull Greta from the car and bring her inside. Carl had followed, hardly believing what was happening.

Upstairs, through the door marked "Training Room #3," he found that Greta had been given fishnet tights, and told to put them on. Looking defiantly at him, she was complying. One of the three men had introduced himself, after removing all his clothes, as "Trainer 5." He was massive in every way, and Carl watched Greta respond to the appearance of his manhood with visible trepidation.

As he watched Trainer 5 pull Greta over his powerful lap, he knew he would do whatever it took to answer the challenge in his wife's eyes. The trainer gave Greta a forceful, shameful hand-spanking. As he did so, he did not neglect to caress her degradingly from time to time, to provoke wild cries of compulsory pleasure, and to demonstrate to Carl just how to get the submissive response he wanted.

That day Carl learned exactly how such a challenge should be answered.

It's the look in her eyes. How could it be anything else? It's a look of defiance that could be directed at the hunk who's about to spank her (hard, if his musculature is anything to go by), or at the viewer who has intruded. The hunk and the fishnets put it over the edge for me, but only after I realized that there was an implied third party: she's not looking at the guy who's spanking her; she's looking at whoever has dared to watch her getting spanked.

Who would the hottest possible viewer be? There might be several answers, but the heat gets turned up for me at least, if the viewer is in some way the same person who decided she should be spanked by the hunk. Marriage is kind of the go to for me, in that regard, but I can imagine an equally hot FMf version of the scene, in which a dominant partner in an Ff relationship has decided to punish her sub with a kind of ultimate humiliation in having a burly guy do it.

Fishnets are just fishnets; cf. lace: anything that covers but doesn't really cover has the double hotness of shaming the sub who's wearing it and providing the Dominant with the voyeuristic pleasure of looking at the sub's shameful bits.
Posted by Emily Tilton at 9:00 AM