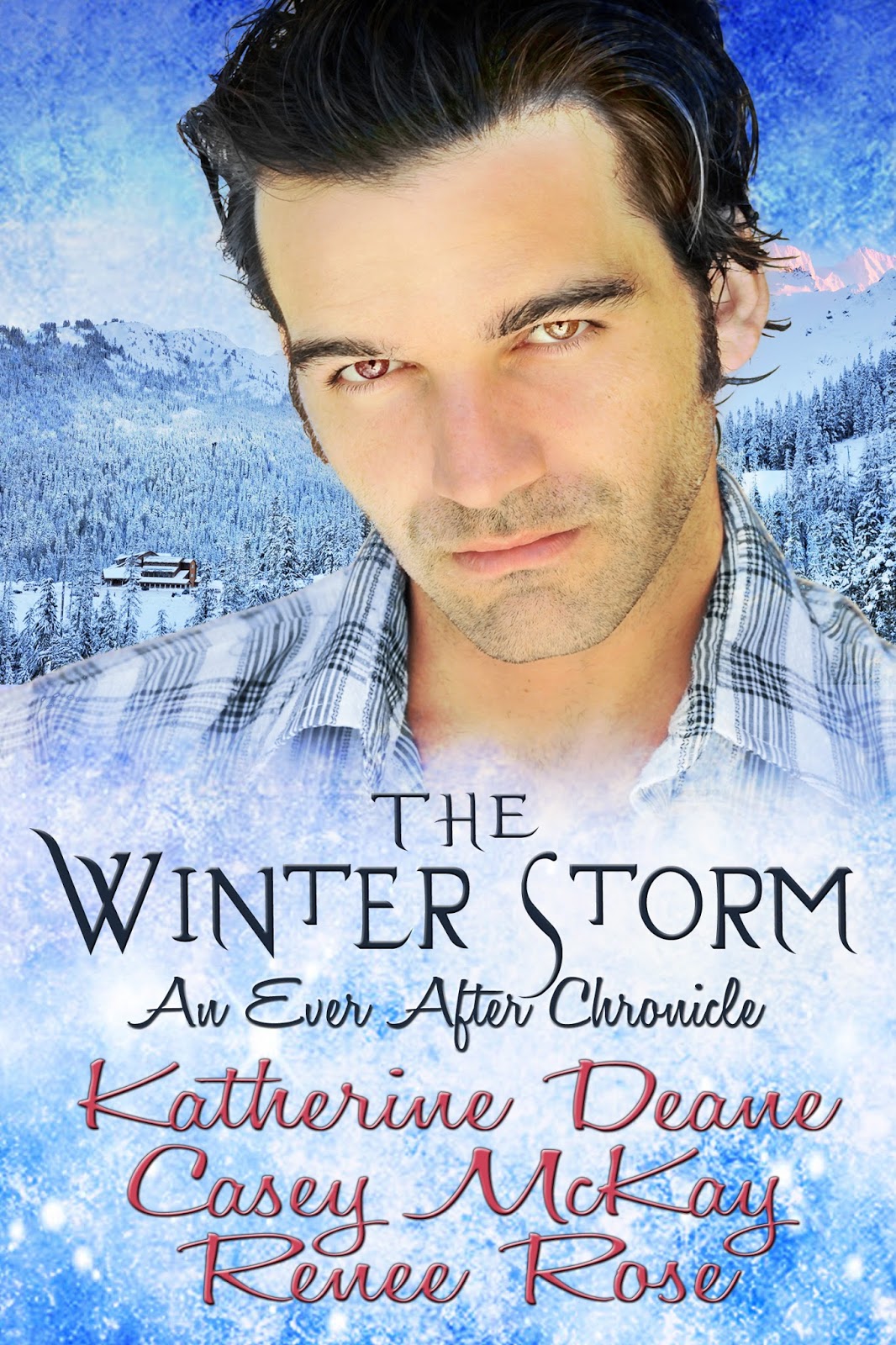 I'm so happy to welcome my friend Katherine Deane today! The Winter Storm gave me a truly magical reading experience, and when you get to know Kate, you quickly realize that that's because it came from the heart of someone who loves the real magic that writers get to make for their readers.

LOL, I’m a huge fantasizer! I have so many stories running through my head, it’s actually a little overwhelming. When I get the story written out, it feels like I am bringing it to life. I can’t wait to share it with the world. Unfortunately, it takes me a bit longer to write, because I get disoriented sometimes when all the characters and plots speak to me at once.

Right now, I have four different stories in my head, and it is a bit overwhelming. If I want to get anything done, I need to grab the chocolate Twizzlers, and force myself to focus on just one. Thank goodness for Write or Die!

What's your desert-island fantasy? (If you were marooned on a desert-island with only a single fantasy to get off to for the rest of your life, what would you choose?)
This one could possibly become my next story line! I would be on a spanko version of Survivor. But I would be the only submissive, and would spend weeks enjoying different Dominant men who would spank me with different implements (I’ve never tried the tawse!), and dominate me in every way possible. I would receive every different type of spanking possible – good girl, sexy, pure submission, punishment, maintenance – all of it!

I would pick the winner, based on who dominated and took care of me the best.

This would also play into my exhibitionist side perfectly, since all of this would be video’d and played on tv. (Probably not live. They would need to edit a lot first- like ensuring the got my best side, and my booty didn’t look fat…)

(You should see my face right now. I don’t think I have ever blushed harder)

Ok, I re-read the question, and realized it would be for the rest of my life. I can live with this fantasy. We would just have a new season and cast every few months.

I still don’t know very much about BDSM, so I’ll answer as a spankophile. I am most definitely a spankophile- it is in my makeup, and there doesn’t seem to be anything I can do to lessen the desire in me. A few years ago, when my husband and I first started our DD journey, I was so frustrated at his “vanilla-ness”, that I wished I could be hypnotized to forget about my spanking needs. It hurt so badly to not have him reciprocate the desire, that I would have rather made it all disappear.
Thankfully, he realized how important a part of me this was (is), so he accepted my request for the spankings, for his domination, for him to be the HOH in our relationship, and we have grown closer because of it. (It hasn’t all been pretty, but we are making fantastic progress!)

So the short answer to the question is this: I am spanko oriented. This will not leave me. It is as much a part of me, as breathing. Forever. Until the day I die. My husband, however, practices, as an act of love to bless my needs.

Who's a favorite character from your own work, and why?
One of my favorite characters is Cindy, from The Winter Storm. She’s a submissive with an alter ego (the Domme, The Stepmother), that she knows nothing about. I love watching her conflicting emotions fighting her submissive and dominant sides. It’s like she is martyring herself as a submissive to punish herself for having the dominant side. But The Stepmother understands perfectly, how strong a submissive truly is, and explains this to Jillian (the main character) in a very deep scene in the story.

Who's a favorite character from someone else's work (erotic or non-erotic) and why?
LOL, I have a crush on practically every brother in The Black Dagger Brotherhood series (by JR Ward), and found personal connections with several submissive women in spanking romance, but my two favorites are probably Harry Dresden (The Dresden Files series by Jim Butcher) and Tavi (Codex Alera series by Jim Butcher). I’m not even sure I can explain why I love them so much. They just seem so real to me, and I live their moments in their stories. I love Harry’s charm and wit, and Tavi--well, he was the ultimate underdog that became a hero to his nation--a true good guy.

I think that’s it. Even with darkness surrounding them, they are truly good guys. And I love good guys.


Thanks so much for having me, Emily! This was so much fun, and these questions really got me thinking. Hopefully, my lack of inner filter didn’t surface too badly. ;)

Here's the blurb for the wonderful The Winter Storm!


In a world where fairy tales and real life collide, in which truth is sometimes stranger than fiction and romance and fetish are the norm, a winter storm forces a cast of characters to converge at a unique lodge, and three interwoven tales are set in motion.

Jillian and her brother narrowly escape a wolf attack, thanks to a shapeshifter, Bertram. As the owner of the lodge, Bertram opens Jillian’s eyes to a whole new world filled with spanking and so much more. Will she keep fighting her submission, or allow herself the chance for true love?
Coral is a fugitive—hiding from herself, her true desires, and the sea witch to whom she owes a great debt. She fears showing real emotion and letting herself be free, but Jake Hill’s dominating presence beckons her to yield to him—not just her body, but her heart, mind, and soul. When the sea witch demands retribution, though, she may lose the one man she has come to trust.
When Faye blunders while casting a spell upon her landlord, he claims her as his slave until she can undo the magic, and she finds herself subject to his firm discipline. As her attraction to him grows, Faye fears she will give in to the handsome shifter and forever lose her maidenhood, and consequently her powers and the ability to fix her mistake.

Even as all three women struggle with surrendering to the dominant men they have fallen for, each finds herself on a journey to discover her true self. Can they find a way to yield to love without losing themselves in the process?

Buy it at your favorite e-tailer by clicking one of these links: