The birth of the Maenad Club in the myth of Pandora 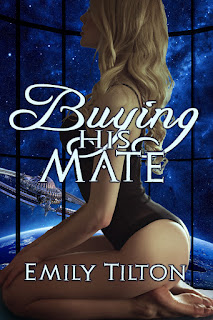 For my Monday excerpt, I thought I would share something from Buying His Mate that shows both the book's philosophical side and its hot side.

No one else had a question, Heather saw. She smiled; time for the real examination. Heather didn’t think she wanted this girl, but there was some satisfaction in making Martin Lourcy anxious that he might not get her.

Fred said, “Go ahead and take off your dress, Gretchen, while we bring the examination table over.”

“I’ll do it,” Diana volunteered.

Heather watched little Gretchen look uncertainly at Diana as Heather’s best friend moved to fetch the table and wheel it into the middle of the room. She’s a sensitive little thing, Heather thought. Has she understood that Diana and I are interested in her for different reasons than the rest of the elites here? The question about self-pleasure had clearly taken her aback, of course, the way it did all the girls, but something in Gretchen’s pretty eyes seemed to betray less confusion than an understanding of how great a gulf stood between the life of a relict girl and that of an elite woman.

“Get that dress off,” Heather said, injecting a chill into her tone, experimentally, to see how the girl would react. “Didn’t you understand what Mr. Gramling said? We want to see what we’re thinking of buying.”

Gretchen’s head snapped around to look at Heather with a wide, startled gaze. She reached to her neck to untie the string there, still searching Heather’s eyes for some sign of compassion and, Heather felt sure, finding only amusement and the acquisitive spirit of a collector. Gretchen dropped her eyes as she loosened the string, and Heather felt a little thrill of arousal travel through her loins at having dominated the girl that way. Perhaps she would bid, after all.

The collectors of the Maenad Club. Heather liked to think of herself and Diana thus. Erika Wendt had come to them, on the eve of the passage of the Act for the Support of Secure Enclosures on Earth and the Taking of Young Women Therefrom and told them that she could not imagine better stewards of her vision for the clear-eyed, ethical use of relict girls for sexual pleasure than the two twenty-two-year-olds who had campaigned for her re-election the previous year.

Heather had looked at Diana, and found her friend and habitual lover as puzzled as she. “Pandora?” Diana asked.

Diana seemed to remember something, though; she had nearly become a teacher before deciding on video production. “The box?” she asked tentatively.

“The box,” Erika confirmed, leaning back into the cushions of her recliner in the den of her quarters, to which she’d invited Heather and Diana for a celebratory drink after the final debate in council. “Or the jar, in the original story. It’s her womb, really—or, rather, symbolically, I suppose.”

Heather glanced at Diana again, and to her relief found her friend once again as confused as she.

“All human evil?” Erika asked, looking from one to the other. “Flies out?” Heather shook her head. Erika sighed. “I thought I’d made progress with educational reform at the beginning of my career. You girls are supposed to be more interested in cultural preservation than my cohort was.” She took a sip of her whisky, then looked thoughtfully at the glass. “Booze is definitely better than it was thirty years ago, at least.”

Heather looked at Diana. Erika got like this sometimes, and you never knew whether to ask for a story or to try to get her back on topic. But she found the main thread again, now. “So,” she said, lifting her beautiful face, its wisdom embodied in the few wrinkles and the snow-white hair always worn back in an elegant chignon. “Pandora gets a jar, full of all human evils. It’s the gods’ trick, but when you understand about Greek myth, that doesn’t make it any less a women-are-the-source-of-all-evil thing, because she opens the jar, and then slams the lid back down before hope gets out. Really, in Greek, the word pretty much means the future.”

She might not remember culture class, but Heather knew herself to be smart as a whip, like every other elite woman. “Children,” she breathed. “Children are locked inside women’s bodies.”

“So,” Diana said, with a bemused smile, “hope isn’t good or bad—it’s just what the human race literally can’t live without.”

Erika smiled. “Pussy. And that’s why we’ve got the Taking. And it’s also why you two are going to keep working for the ideals we share.”

Click here to buy it on Amazon!
Posted by Emily Tilton at 7:59 AM