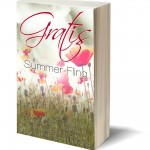 I had two projects of which I'm really proud come out over the weekend, so I'm going to double your arousal today!

Here's a part of Isabelle's Submissive July that I love. It's my story in the Gratis: Summer Fling anthology, which you can get for free at the links that follow!

When she'd seen the notice on the club board, by the pool, she had actually felt the blood drain from her face, and then return in a rush. Her hand shook as she tore off one of the little slips Mr. Larchner must have cut between, so prospective babysitters could take his number with them. She even had to repress the urge to tear off all the other slips.

Then her fingers had trembled on the screen of her phone, as she dialed the number.

Then, when he had said the thing about going to Vermont, and hanging out and sightseeing, she had no idea what to say, so faint did it make her feel to picture herself in Vermont with Mr. Larchner. What was wrong with her?

She put the phone down with trembling fingers and wandered into the bathroom, really just trying to figure out something she might do to take her mind off wanting to call right back and tell Mr. Larchner that she would definitely babysit for the whole month, and could he please deflower her, too.

She looked at her reflection, and felt torn between liking what she saw and the certainty that Dan Larchner, unbelievably hot older guy, would never actually seduce a fairly skinny, brainy looking girl with breasts that hardly filled a B cup and mousy shoulder-length brown hair that she always pulled back into a ponytail. Plus, her nose: her long nose. Her sea-blue eyes were her best feature by far, but surely Mr. Larchner would prefer hazel or something exotic, like green.

What was wrong with her? Isabelle found herself pulling down her jeans. Just to see what I look like down here. Cotton panties with a floral pattern, and a tiny bit of lace around the legs and the waist. What kind of lingerie did Mr. Larchner like? Surely the really lacy kind. Isabelle sighed: she had always wanted to buy herself something like that, but her mother still did her laundry.

Self-consciously, she touched the fabric of her panties, watching in the mirror as the hand, like the hand of another person, performed the sexy gesture. Isabelle heard a little sound come from her throat at the pleasant, frustrating sensation. She didn't do this very often, but now she couldn't stop, as she thought of Mr. Larchner, touching her floral panties, telling her that she would have to wear something lacy next time, but that for now cotton with little blue flowers was fine with him.

Isabelle pressed harder, right where her clit lay hidden by the panties. God, she had never felt the need to play with herself this much, had she? She ran her hand down, between her thighs, spreading them as much as she could, bound by the jeans as they were. Something about that, about the way her jeans held her knees close together, felt so very right. What if Mr. Larchner had taken them down, and left them there, and said, "This is how I like you, Isabelle"?

To her thrilled shame, she found that she had already soaked through the cotton between her legs, over her pussy, where someday a cock… oh, God—had she just thought that terrible word, that naughty word? What did Mr. Larchner's cock look like? Was it big, like the one in the video Michelle had shown her on the 'net that one time?

What if he told her to kneel down and suck it? When the kids had gone to bed, in Vermont, would he tell her it was time to learn to suck a cock? And… and to… to bend… over… with her panties down, on top of her jeans…

Still watching like a hawk in the mirror, even as her knees trembled inside the denim that bound them together, she worked her fingers inside the right leg of the panties, and then she couldn't stifle the little cry of pleasure when her middle finger, twined in her sparse thatch of wiry fleece there, pushed against her aching clit.

"Isabelle?" her mother called from just outside the bathroom door. "Are you okay?"

"Fine, mom," she called back, and bit her lip hard. She took her hand away, clenched it into a little fist, feeling the shameful, slippery wetness on her fingers. What was wrong with her?

She left the bathroom, went back to her own room, and forced herself to do some of the last remaining homework of her high school career. Precisely one hour and two minutes after she had hung up, before the incident in the bathroom, she called Mr. Larchner and told him that she'd love to go to Vermont to babysit Daniel and Sarah.

Just get Gratis Summer Fling. I mean, it’s FREE, after all! 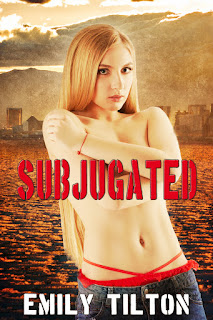 Now Subjugated is a very different kind of book, as this excerpt will demonstrate, I'm fairly sure!

As she read the letter, Jenna felt her whole body flush, and then go ice cold in horror, alternately, over and over. She had known that the subjugation would be shameful, and even painful. She had known that it would involve paddling, she supposed, because that was a punishment she had grown accustomed to seeing in school assemblies.

But she had never even guessed that the subjugation might involve the kind of humiliating display described in the letter. She remembered her mother telling her in those same brief, whispered conversations in January about the idea of Plan Beta and how if it should come to pass, she must not submit entirely, so that she might provoke the interest of those who watched the subjugation. Jenna thought her mother had wanted to tell her what subjugation entailed, but there had never been time, perhaps because whenever her mother began to talk about it, her face turned very red and she couldn’t continue.

And Mrs. Trest would be coming to inspect her, the same way she had that horrible day at the beginning of the Human Development unit. Inspect her, to make sure she had bared herself properly. Jenna looked at the red panties lying on her bed, and pictured what she would look like in them once she had carried out the instruction about shaving herself between her legs. Mrs. Trest had in fact given the class instructions about how a girl should shave there, and Jenna blushed as she remembered the severe-looking, brown-haired woman in her mid-forties, telling Jenna and her classmates to use scissors to trim the hair down, then to soak in a warm tub, and to shave there.

Should she just go get it over with now? She turned involuntarily and glanced again at where she knew the surveillance camera lay in the crown molding of her room. As she grew up in that house, her father had often warned her about the cameras, and how if she overheard anything about town affairs, she must never mention it, even at home. Some of Jenna’s friends had admitted to being a little embarrassed to know that anyone at headquarters would watch them in their bedrooms or even their bathrooms, but because Jenna wasn’t conscious of doing anything improper, she regarded the surveillance cameras as a security measure that liberated them from fear, as General Dumfries declared in his weekly message.

At least, that was how she had felt until her father had taken her on a long walk, and told her how the Western Republic really worked, and about the possibility of escaping to the Eastern Commonwealth.

Deciding that she must begin by following the instructions from the captain—what did he look like? how cruel would he be?—to the letter, Jenna started to unbutton her white school-uniform blouse. She had a sudden, defiant urge to turn to the surveillance camera and remove all her clothing brazenly, to say, So you want to see my naked breasts and my naked pussy? Well, here they are.

But instead shame won out, and she turned her back to the camera as she shrugged her blouse from her shoulders, and then unhooked her plain white bra. Absurd, she realized, because of course they would see everything very soon. But something in Jenna could not overcome the modesty her education had instilled. And hadn’t Mrs. Trest said that men much prefer to marry modest girls?

As she unbuttoned the waistband of the little kilt, she wondered, when army officers watched girls who were going to be subjugated, whether they liked modesty or brazenness. The thought seemed so strange to her that she tried to push it away, and she focused on the feeling of the wool against her fingers, and then against her legs, as she stepped out of the uniform skirt.

Underneath, she had the regulation black thigh-high stockings that eighteen-year-olds wore, and the regulation white cotton panties. Blushing furiously, she rolled down the stockings and laid them together with her kilt on top of the blouse and the bra on her bed. The time had come, and Jenna felt her blush deepen as she hooked her thumbs into the waistband of her panties and began to pull them down, sure that the exposure of her little bottom would be closely observed by the officer who would arrive in a week to give her his further instructions.

She put the school panties on the bed and picked up the lacy ones that had come from the envelope. Trembling, she sat on the bed and began to pull on the red panties. As soon as she felt the lace up against her pussy and her bottom and felt the way it both covered and exposed her, she understood the terrible logic of the instruction to remove all her hair there and bare herself for her subjugating officer: Jenna must have no covering between her waist and knees that had not been specified by the man who would possess her there.

Click here to buy it on Amazon!
Posted by Emily Tilton at 10:31 AM