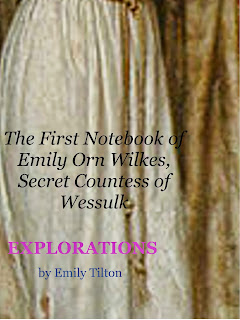 Here's another teasing excerpt, from one of the naughtiest bits: the same section I excerpted on Monday, where Emily is chained naked to the floor in the lovely salon.


At any rate, I must try to describe the feeling of the chain. First, the sensation of being bound to the floor, and so to the very foundations of the town-house in which Smith’s was established for so many years. I was new to Smith’s, but already certain that some long, honored tradition lay behind it; to convey the essence of that tradition in so little time was one of Mrs. Smith’s great gifts. The chain signified first and foremost that I must submit not only to my husband, but also, and indeed more importantly, to the drama itself into which he had called me, the drama which was refined and developed (as a symphony’s themes, noble and pathetic, brash and elegant, are developed) here, and in other such great establishments.

Second, the sensation of an un-freedom so complete that one’s entire world had been shrunk to a very few feet of space—such a small ambit, in fact, that the miscreant could not even stand up should she try. I can at least give you a striking, particular instance of this feeling, from that first morning at Smith’s: I had not waited very long before I urgently needed to relieve myself; I called out, pleaded, wept, sobbed, and finally submitted to my body’s own command. I doubt you can come close to imagining what it felt like for a genteel young lady, raised to respect a home’s furnishings, perhaps even to respect them above anything else, to make water onto a Persian rug. This was the sort of things in recompense of which dogs are whipped, I could not help thinking as, horribly fascinated, I watched the moisture spurt down my thighs and onto the rich, red carpet and felt the marvelous release of those muscles so long held tight, groaning shamelessly aloud.

And, once again, the blurb (buy the book here!):


Mrs. Smith was suddenly very matter-of-fact. "Very well, Miss Orn. It is my custom to test a new girl’s obedience immediately. Stand up, if you please, and allow me to assist you in removing your clothing. In order that there be no false pretense here, let me warn you that you will be required to remove every garment, including your chemise."

My conscious mind now rose in open rebellion against the impulse that had had me give my word. How could I obey her? Why had I given my word to do so? Had I had any inkling she would ask such a thing?

NOTE: This book comprises material previously published in the following books: Emily, Victorian Bride; Emily in the School for Wives; Emily Undressed; Emily's Bath; Emily's Morning; and EXPLORATIONS: Books 21-24. I here present it as a continuous story and without the intrusion of the modern narrative of my fantasy-tale, for readers who might be more interested in this Victorian material.

This book of EXPLORATIONS contains fiction elaborating the following sorts of fantasy that you may wish to avoid: Mf, ff, Ff, spanking, mild watersports. It's intended for over-18 audiences who, like me, are interested in exploring the lines between pleasure and pain, dominance and submission, and fantasy and reality. All characters depicted are consenting adults.