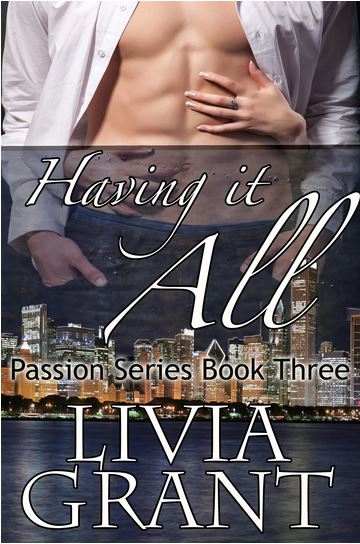 I think if I only had one fantasy or scene to play over and over in my head to masturbate to for the rest of my life, it would be the scene I wrote in the middle of Having it All. I affectionately call it “The Limo” scene. If you haven’t read the book, you should seriously buy the book just to read this scene. It has everything that pushes my buttons in an extreme way. Steamy sex, exhibitionism, voyeurism, taboo (group sex even though they don’t actually have sex with the other partners). I’ve always loved books that had ensemble casts and in this scene the friendship dynamics between the two main couples comes together in an awesome, sexy way I find amazingly hot. I wrote it from Tiffany’s POV because well… I want to be her in the scene.

I suspect some of my fans think this is a no-brainer, but it’s not. The obvious answer is Lukus Mitchell because let’s face it, he is the ultimate sexy alpha Dom that many women swoon for. But I would argue we wouldn’t love Lukus nearly as much if we didn’t have Tiffany to balance him so I will vote Tiffany and Lukus as my favorite couple. I love how they both remain true to their core self while working so hard to grow together as a couple. I love how they are both flawed, yet lovable. I am very proud of how they have turned out both as individuals and as a couple.

I spent about ten minutes trying to come up with an answer to this and decided it is impossible. There are too many I love to pick. Sorry!

Having it All, Book Three in the Passion Series

Book one is on sale for $.99 - Start from the beginning with Wanting it All

Meanwhile, their best friends, Brianna and Markus Lambert, are still reconnecting after a recent event which almost ended their marriage. As awful as it was, it made them both realize not only how much they love each other, but also how important it is to share your darkest desires with your spouse. Markus is more than willing to accommodate Brianna's desire to be dominated in the bedroom, yet the couple has more than a few growing pains to work through as the dynamics of their marriage change from vanilla to D/s, with a sprinkle of DD.

Not content with almost having wrecked the Lamberts' marriage and threatened Tiffany, Jake Davenport remains a threat in the two couples' lives and relationships, and Lukus soon discovers that Brianna and Tiffany aren't the only women Jake is targeting.

Can Tiffany find the strength to overcome her fears in order to let Lukus love her not only as a woman, but as his submissive? Can Lukus deal with the way his new love challenges him at every turn, forcing him to confront fears he never even knew he had? Can Markus and Lukus protect the women they love when Jake gets too close for comfort?

Find out in this, the third book in the Passion series. With the characters from previous books which readers have come to know and love, as well as introducing new ones, this is a fast-paced, intensely sexy, edgy and emotional story that combines humor, drama, friendship and romance in the way Livia Grant fans have come to expect, and new readers are sure to enjoy.

Waiting for the show to start, Lukus draws Tiff back so she's resting against his chest. His lips brush her left ear lobe while one hand explores her splayed open pussy and the other cups her right breast.

"So, you didn't want to go through the contract. You'd rather talk about things. We'll consider tonight our first official contract negotiation, baby. I have you as a captive audience, and we're going to talk about all of the things happening on stage. What you like. What you don't. What you'd try. What you won't. Understand?"

"Maybe." Lukus sucks her left ear lobe into his mouth while burying what feels like two fingers deep in her wet cunt.

"Here's the deal. You keep talking, I keep rewarding you. You clam up, I keep my hands to myself."

"I prefer resourceful. First question. We'll start easy. On a scale of one to ten with ten being you love it, how do you feel about having your legs tied open and being immobile like this?" he asks her.

"Oh, so you'd rather I start with asking how you feel about needle play?"

"Well sure, since that's a negative ten. See. Easy." Tiff loves his chuckle.

"Fair enough. How about the naked slaves next to their Masters and Mistresses?"

"What am I rating? Watching them, or how I'd feel if I was one of them?"

"Okay, well watching them is fine. Good, even. Being one, I'm not sure yet."

Center stage, arms strung high against a thick wooden whipping post, a frightened and vulnerable woman hangs. As if hanging by her arms isn't painful enough, her legs are bent and pulled up and wide, secured by artfully wrapped layers of white rope, leaving her entire body open for inspection and punishment. Even from a distance Tiff can see tears streaming down her face; tracks of black mascara in their wake.

She becomes aware of Lukus leaning in close. "How are you doing, baby? What number are you?"

'I can't tell him the truth. What will he think of me?'

"Eleven. I'm at an eleven." She hears his sharp intake of breath.

"I think I can work with that."

Livia Grant lives in Chicago with her husband and two sons... one a teenager, the other a furry rescue dog named Max. She is blessed to have traveled extensively and as much as she loves to visit places around the globe, the Midwest and its changing seasons will always be home. Livia started writing when she felt like she finally had the life experience to write a riveting story that she hopes her readers won't be able to put down. Livia's fans appreciate her deep character driven plots, often rooted in an ensemble cast where the friendships are as important as the romance... well, almost.

Where you can find Livia:

Corbin’s Bend - http://www.corbinsbend.com/
Posted by Emily Tilton at 9:00 AM