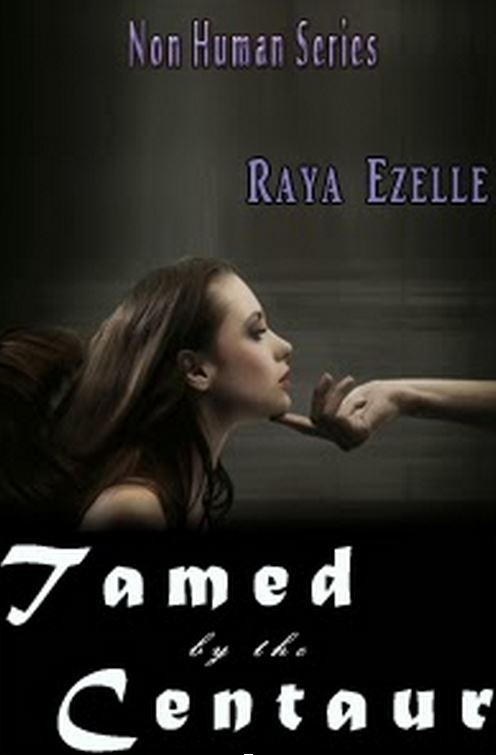 Raya Ezelle (find her blog here) is a heroine of mine for the way she doesn't stop at the boundaries where so many writers stop. If the taboo stuff that makes your eyes widen and your breathing harsh turns you on, do yourself a favor and check out her writing!

I write taboo erotica, stuff that excites readers and also makes them gasp and grab onto their chairs thinking “how could she have put that in print?” even as they read more. I have a wide-range of taboo topics I cover, feeling that nothing should be above being able to write about. The absolute only thing I won’t publish is a book where the main characters are 17+under at the telling of the story - and that is for legal reasons. Flashbacks are a whole other realm. *grins*

Oh, wow, only one? How cruel! Umm, I’d have to choose being licked for the rest of my life. As to whom would be doing the licking? Well, now, that’s for me to know…

As a sub and a spankofile, it is part of who I am, just as being heterosexual and sapiosexual. I can think for myself, but I need a man who enjoys & needs having control just as much as I need and enjoy giving it up. I can twist myself into a pretzel by overthinking and become manic when I work. I need someone who can yank me back and say ‘stop’. Being with someone I trust like that? Is pure heaven to me. And in a sexual manner, I need him in control. Nothing better than just needing to feel and pay attention and have all the decisions left up to another.

And for the spanking part, that is just one of the many kinks I have. I enjoy it on a sexual level, but it is also great as a disciplinary tool. The difference, as many people wonder, is the emotion behind it. If I’m being disciplined, it isn’t going to turn me on because I will feel like crap because of whyever I’m being punished. Whereas for sensual and sexual need, it can crank up my desire so quickly it isn’t even funny. Especially that all too sensitive sit-spot.

Let’s see...I have a variety of characters. Off the top of my head it is somewhere between Nurse in the Finishing School series and St. Nicholas in my North Pole Files series.

Nurse is such an odd combination. A very pleasant man with certain boundaries that make him grimace, he also has no trouble doing things he enjoys. One of his favorite kinks is enemas, and he’s always so pleasant to his girls, whether they are shouting at him or responding sexually. His job at Finishing School makes him a major character - one I was all too happy to use in each volume. Nurse has a very interesting outlook on his job and life.

So many characters to choose from. Okay, if I have to choose one, I will pick Tom from Rolf & Ranger’s Falls Chance Ranch. FCR is a M/M domestic discipline series. The terms Top and brat are used to differentiate between the two sides. Tom is a brat who, as he freely puts it, is much closer to the top end of the spectrum and because of that and other issues, has some major issues with how others act and how he is perceived within his dynamic with Jake, his Top. He has an outer shell he wears to try to keep others at a distance so as not to get hurt and yet on the inside, he is one massive amount of pain and disquiet. The only one he truly loves and can trust is Jake and it is only in him that he can trust and be himself.

I understand Tom as I also have my shell that I wear and can only be myself around a chosen few.

Here's the blurb for Raya's book Tamed by the Centaur:

With the gates closing soon, this is her last chance to get out of the city and explore the forest without before her chance is lost forever. Niria has no idea of the mythical creatures she will meet. Including a randy satyr and a strong, powerful disciplinarian of a centaur.

Find it here! And here's a scorching excerpt:


"A centaur?" she breathed, unable to believe it. The body of a horse and the torso and head of a man, he was simply stunning.  A striking chestnut coat with a dark black tail caught her sight first, but as she gazed at the human side, she found she could not look away from him. A sturdy set of abs along with a deeply muscled chest and forearms started the picture. As her eyes settled on his face, she wondered if it was possible for someone to look like they were a step out of time. He almost didn't look real. If the breeze wasn't blowing his long black hair behind him, she would be sure this was a mirage. For a moment she forgot his words. Until he spoke again.

"Come, human child. We must get you back to your city where you are safe."

Drawing herself up to her fullest height, which brought her to his navel, she stomped her right foot. "I'm not a child."

He stepped forward until he was right in front of her and she had to lookup, up, up, cricking her neck to look up into his face. He leaned forward at his waist, placing his forehead in front of hers. "I am thirteen hundred years old, human. You are a child."

His eyes, recessed in a smooth face that looked both ancient and young at the same time, were a deep emerald green, glowing brightly beside his deep russet skin. Before she consciously thought about it, she reached up and touched his cheek. He reared back, stomping his front feet as he came down and startled, she leapt backward.

"Child!" he said harshly, his nose flared, "Do you not know to never touch a centaur unless they give you permission?"

"Uhh." Her mind ran quickly through the bits and pieces she had ever heard of centaurs, looking for any information. Finally a small piece came to her. "Well, sort of?"

A long, low sigh left his lips even as he shook his head. "I understand. You are one of those who must brave their own way, making their own mistakes and paying for them. Tell me. Did you choose on your own to leave your city?"

His sudden change in emotion threw her off and she answered immediately. "Yes. I always wanted to and there were only three days left, you see."

He nodded, sagely. "Yes, I understand more than you know. Come. Let us take care of your infraction so that you can return, lesson learned." Having no idea what he meant but pleased he was no longer angry at her, she followed him a short distance through the wood until they came into a small opening.

In the center was a bench made of wood. The strangeness of it appearing like that confused her and she stopped and stared at it as he walked over to one of the trees, whispered something unintelligible under his breath and reached forward, breaking off a large branch. He walked back toward her and motioned at the bench. "Bend over it."