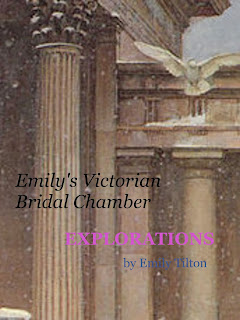 The tease, which is significantly meatier than the naughty thing I did on Saturday, is below. How else could I get you to read the ultra-significant news about EXPLORATIONS?

And that news is big. After high-level talks with trusted advisors, I've decided to try reconfiguring the project along not one, not two, but three different, new tracks. I'll be opening the first of those tracks in my next release, after Emily's Victorian Bridal Chamber (buy it here!), so this is, I suppose, the amazing title-reveal:


My spanking romance colleagues have said kind things about the Victorian material, and made me wonder whether a release of the first part of it, on its own, might be a better fit for some readers. Worth trying, at least! Watch this space for further teases and reveals, of course.

And here's the tease for Emily's Victorian Bridal Chamber (buy it here!). This excerpt comes from much later in the book than the bit I dangled Saturday. Emily's new husband has just told her that he wooed her because he had heard the story of her severe chastisement for "debauching" her best friend.


Here at last was an explanation of certain things that had remained until then mysterious in the relationship between Mr. Wilkes and Mrs. Smith. But at that moment the coach stopped; we were arrived at our new home. The servants, who met us of course in the front hall, were all very kind in their congratulations, and I was quite unable to tell which, if any, of them, were party to the great drama. I remembered Polly, and suddenly wondered whether she might be hired away from Smith’s. The thought did nothing to decrease the intensity of sensation I was experiencing from the aide-mari, now that the time of my finally learning what it meant to be deflowered approached.

“Mrs. Ramsay, we will be retiring, now. Would you please show Mrs. Wilkes her chamber, and in the absence of her maid would you assist her there? The wooden case is to be placed on her coffee-table. Mr. Ramsay, would you see that supper is ready to be served in Mrs. Wilkes’ sitting-room at 10 o’clock?”

No explanation nor excuse was given for a bride to be put to bed at four in the afternoon. Neither house-keeper nor butler showed any sign of knowledge of what was now to take place—that the new mistress would no longer be a maid when supper was brought to her sitting-room, and that however she might struggle her bridegroom was now to take his pleasure of her maidenhead at his leisure and for as long as he chose.

And, of course, the blurb:


"This last condition may seem strange, but it is absolutely essential that we have such evidence before we begin to plan for your visit, as the ostensible reason for your presence in Prophettown will be that you have applied to have Mrs. Smith fulfill the role of the Whore of the Nations in the yearly festival of the Angel of Love. We will explain further if we are able to reach an agreement, and you are on your way to Prophettown, but in brief the role of the whore is forbidden to the women of Prophettown, and so men from the outside world, who own submissives, apply (with a large fee, which we will of course waive in your case) for their submissives to play the part, because the owner of the girl who plays the whore is given his own special, highly-coveted, role in the festival. As you have no doubt already guessed, the role of the whore involves polyandrous service; in order to allow you passage to Prophettown, Mrs. Smith will have to be prepared to play it, and I will have to have the same sort of audition-video for her that I have for the other candidates.

"Please let me know as soon as possible whether you agree to these conditions. Once you do, we can begin to plan your passage, which will have to take place very soon, since the festival occurs at midsummer, less than three weeks from now.

"I am yours, sincerely,

In the 27th book of Explorations, as the story of fantasy-Emily's connection with Prophettown gathers a frightening sort of momentum, the story of Victorian Emily's wedding-night also comes to its crisis point.

This book of EXPLORATIONS contains fiction elaborating the following sorts of fantasy that you may wish to avoid: Ff, Mf, ageplay, pseudoincest, diaperplay, spanking. It's intended for over-18 audiences who, like me, are interested in exploring the lines between pleasure and pain, dominance and submission, and fantasy and reality. All characters depicted are consenting adults.