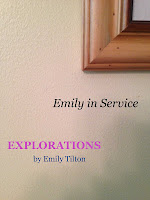 
Then I felt a rush of air, and heard a crack right next to my ear, and felt Sarah's bottom tense next to me, and heard her cry out, all at almost the same moment. My eyes flew open to see the leather paddle being pulled away from Sarah's bottom.

CRACK! It struck again. Sarah sobbed. "Please, sir. . ." she said, "I'll try harder. . . I promise!" CRACK! Seeing the paddle strike so close to my face was, to my horror, intoxicating. Sarah's bottom jiggled delightfully as she tried in vain to ease the sting of the spanking.


"When I saw the rocking-horse, I was instantly sure that Charles had found a kinky carpenter somewhere. The rocking-horse was astonishingly beautiful, in the colorful style of a carousel pony (though it was much smaller, so that, presumably, a man might stand conveniently behind a girl who rode it)."

The 20th book of Explorations concludes the "Sarah" books with two scenes from fantasy-Emily's polygamous household: Emily's and Sarah's "benching day," when fantasy-Charles, as their "Headmaster," enjoys them both exactly as he pleases; and a day of lewd service for them, at Charles' command, to two strangers in masks. The identity of those strangers, revealed in part at the end of the book, will change the course of all their lives.

Here's the link to buy: Emily in Service. For more information about the crazy EXPLORATIONS project, click on the link!

Check out all the Saturday Spankings!