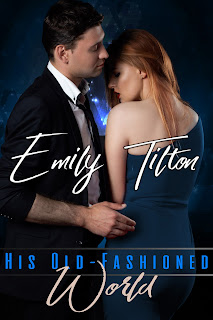 When Jenna Burke wakes up in a hospital after an experiment in a particle physics lab, she is surprised by the patriarchal manner of the doctor who examines her. His refusal to believe she is a trained physician herself comes as a shock, and Jenna's confused and angry reaction results in her being placed into the care of Dr. Michael Weathers, a stern, handsome psychiatrist.

At Michael's home, Jenna quickly discovers that the reality in which she now finds herself differs significantly from her own. Most importantly, the men of this society are more than ready to take a woman in hand and correct her properly if her behavior warrants it, and her sharp tongue quickly earns Jenna a trip over Michael's knee for a painful, humiliating spanking.

Despite her shame and fury, having her bottom bared and thoroughly punished arouses Jenna deeply, and she soon finds herself wondering what it would be like to belong to a firm-handed man like Michael. But can a woman like her really find happiness in his old-fashioned world?

Publisher's Note: His Old-Fashioned World includes spankings and sexual scenes. If such material offends you, please don't buy this book.

Here's an excerpt to tease you:


Jenna knew, suddenly, what she had to do, even though as she chose it she had a strong, sinking feeling that the choice would only in the end make things worse for her.
“I want to call the police,” she said quietly. “I want to call 911, to stop you from abusing me.”
Michael looked back at her with a mixture of surprise and alarm apparent in his eyes. He took a step back and appeared to ponder the possibilities, as Jenna realized that she had actually managed to shock him with what he considered to be her delusion. The idea that a woman might call the police to avoid a spanking seemed, unfortunately, to have at least for the moment convinced him that Jenna had indeed become demented.
He appeared to come to a decision and, with a grave look on his face, nodded slowly.
“Alright,” he said. “Why don’t you find the number for the local police on the net. I’d rather you not call 911, obviously, because I think it’s a waste of resources when I’m pretty sure you can tell I’m not threatening you, but rather trying to discipline you.”
That word, discipline, made Jenna’s heart flip in her chest, and she didn’t understand why—nor did she stop to examine it, because her mind had occupied itself fully with the essential problem of his immediate willingness to have the police called on him for what Jenna knew she would be able to put to the authorities as at least the threat of domestic abuse.
She narrowed her eyes. “So you’re going to deny that you just threatened to spank me?”
Michael looked back at her in what looked like utter incomprehension. “Why would I deny it? I guess you can use the word threaten if you want, but I’d rather save it for actual violence, rather than discipline.”
That word again. Again Jenna ignored her strange, unexpected reaction to it.
Half of her, now, felt certain that to call the police would produce results for which she would regret having done it. The other half still clung to the idea that if she could bring in someone from outside, they would tell her that Dr. Michael Weathers was the crazy one.
“Okay,” she said, hoping that to agree with him on something would help the situation, “no 911.”
“Thank you,” he said. “Go ahead and look them up, and I’ll get the phone for you.”
Even before she said anything to the voice at the other end of the phone, which had just answered with “Reba County Police,” the undeniable masculinity of the voice made Jenna’s heart sink further. She had been hoping so hard that a woman would pick up.
“Hello,” she said.
“Hello, honey,” said the policeman at the other end in an avuncular tone. “Is your husband or your daddy there to talk to me?”
Oh, my God.


She tried desperately to keep her voice steady. “This is Dr. Jenna Burke,” she said, “and I need you to send a car. I’ve just been threatened.”
Posted by Emily Tilton at 6:23 AM