The hotness of institutes

According to most definitions, an institution is a set of practices, a sort of subset of a culture. Church. School. Governmental bodies like courts and legislatures.

An institute, though, etymologically speaking, is just something that got set up at some point by a group of people, in a particular place and for a particular purpose. The Massachusetts Institute of Technology. The Institute for Advanced Studies.

My own Institute, established for the purpose of training submissive concubines and supplying them to wealthy buyers.

A place for men to send girls like me. 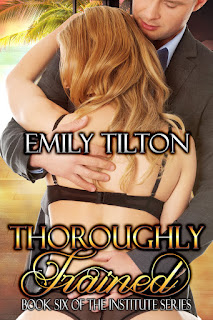 Coincidentally enough, I have a new Institute book! Here's a cover and a taste:

“Anna,” he said, using the direct approach that he knew—because every field assessor knew these statistics by heart—had only a 32% chance of success, “do you mind if I do a little Internet search about you?” The chance it would work was a lot lower than a slower technique would have, but Charlotte had only given him ten minutes. This kind of calculation made up a great part of a field assessor’s skillset, and Martin felt confident he had made the correct choice. Even if it turned out that he lost Anna, he knew he would keep that confidence.

“What? I mean, why?” She had a truly adorable crinkle between her blond eyebrows now.

“Can I tell you that after I do the search?”

The crinkle deepened. “Well, I guess… I mean, why do you need my permission?”

He didn’t, really. All the data the Super would access in the next few minutes lay within their agreement through the secret TARIFF (Trans-American Recognition In Financial Funding) Act that had authorized such searches by government-liaised corporate entities, for an exorbitant fee that currently constituted nearly the entirety of the funds keeping the federal government going.

But the TARIFF Act provided for behind-the-scenes data gathering, not the semi-consensual sexual awakening of repressed submissive concubines. To get Anna started toward her ultimate well-being and Martin’s pleasure—and, of course, eventually the pleasure of whatever wealthy man chose her—he would need to approach the matter with her as if he must obtain her consent.

Martin smiled. “It’s polite to ask, don’t you think? Before you start looking into things a person who would probably rather choose what sort of impression she wants to make might not want you to see?”

Anna blushed—only very slightly, but again her fair complexion, utter peaches-and-cream, made it visible. “Oh, you won’t find anything like that.”

“Like what?” Martin made his tone as innocent as he possibly could. The time for slyness and innuendo had not come yet, and if he had anything to say about it, wouldn’t arrive for a while. A great deal more fun—really almost too much fun—lay in seeing how deeply even the most innocent things would evoke Anna’s shame.

Her blush did indeed grow, suffusing her whole face now. She tried desperately for a pretense of jadedness. “Oh, I don’t know,” she said. She looked around, then, as if a part of her mind fought against the spell Martin had begun to cast on her. An anxious expression broke out, and the blush faded. “I really have to go,” she said, darting a glance at him and then looking around her chair as if for her coat.

“Your coat’s on the rack at the door, Anna,” Martin said very gently, “and I don’t think you do have to go. The search will only take a minute. Just sit.”

And he took his handheld from his pocket and concentrated on getting the preliminary assessment going, peremptorily breaking eye contact with Anna to do so. In his peripheral vision he saw her shift in her seat. She herself didn’t realize it, but she had moved to try to get his attention back on her, in an instinctive riposte to the first command Martin had given her: Just sit.

It would not, he now found he hoped fervently, represent anywhere near the last command he would give Anna Greenway. Along with the hope, too, came growing confidence: her little fidget made him as sure of her as he had ever been of a girl’s suitability before the results of the preliminary arrived. Girls who shifted in their chairs when told to just sit knew, though the knowledge lay deeply buried, that they needed not only such masculine instructions but also the masculine enforcement of those instructions.

Click here to buy it on Amazon!
Posted by Emily Tilton at 7:42 AM